Spotlight on Cell and Gene Therapy...

An Introduction to Cell and Gene Therapy

Cell and gene therapy is a rapidly developing field. It promises significant long-term health benefits to people suffering from a wide range of diseases, from ophthalmological disorders to cancer.

Cell therapies repair or replace damaged cells or tissue and involve the injection of intact, living cells into a patient. These are either derived from the patient (autologous cell therapy) or a donor (allogeneic cell therapy).

Gene therapy involves introducing, removing, or changing genetic material to alter how a protein or group of proteins is produced in a cell, to alleviate or cure a disease.

Cell and gene therapies are combined in some techniques, such as ex vivo chimeric antigen receptor (CAR) T-cell therapy (figure on the right side). But they can also be utilized entirely independently, for example, in mesenchymal stem cell (MSC) therapy (cell therapy only) and in vivo viral gene transfection (gene therapy only).

In an autologous CAR-T cell therapy, T cells collected from a patient are genetically modified ex vivo and re-injected into the patient

Autologous transplantation is patient specific, whereas allogeneic transplantation extracts cells from a universal donor before cell expansion and delivery into multiple patients

Cell therapy technologies for the development of immunotherapies can be autologous or allogeneic (figure on the left side).

Autologous cell therapy is patient-specific, involving the isolation and expansion of cells and their subsequent re-infusion into the same individual (for CAR-T cell therapy, isolated cells are genetically modified before reintroduction). The advantages of autologous therapies include low immunogenicity and the avoidance of graft-versus-host disease. Conversely, the main draw-backs are the length of time required for cell expansion, the variability of the donor’s starting material, and an inability to harness economies of scale for such an individualized treatment.

Allogeneic cell therapy entails the isolation of cells from a single human leukocyte antigen (HLA)-matched donor, which is then expanded to treat many different patients. MSCs have been the pioneer cells for such applications, as they are easily accessible, their isolation is straightforward, and they can be biopreserved and stored with minimal loss of potency for point-of-care delivery. Moreover, MSCs have thus far shown no adverse reactions when used in allogeneic therapies to treat cardiovascular, neurological and immunological diseases.

Comparison of Autologous and Allogeneic Strategies

Gene therapy, using either in vivo or ex vivo strategies, holds promise for the delivery of enduring treatments or even cures for previously untreatable diseases (figure on the left side).

In vivo gene therapy involves the direct delivery of a modified and therapeutic gene into a patient – an approach that has achieved success in the treatment of neurological disorders and hemophilia.1 Some of the most encouraging applications of ocular gene therapy are for Leber congenital amaurosis (an inherited form of blindness), glaucoma, and age-related macular degeneration.

Ex vivo gene therapy (cell-based therapy) involves removing target cells from the body, modifying their genome in vitro and subsequently delivering these cells back to the patient. Ex vivo gene therapy applications have focused on immune cells such as T cells or NK cells to treat vari-ous diseases, particularly cancer.2

Owing to its targeted and personalized nature, ex vivo gene therapy benefits from an improved safety profile. However, cell retrieval and in vitro manipulation can be a costly and intricate process. In vivo gene therapy is potentially more straightforward, but faces challenges such as toxici-ty or the induction of immune responses.

Early clinical trial success with several treatments has resulted in approvals of five gene therapies to date, with numerous other clinical trials underway:

Gene therapy could bring about significant breakthroughs in the treatment of disease. The key to the development of clinical tools is the safe and precisely targeted delivery of exogenous genetic material into the cells of patients. Viral and non-viral vectors are used for this process.

In vivo and ex vivo gene therapy using viruses harnesses their inherent ability to invade cells to deliver manipulated genetic material. The use of viruses to transfer genetic material, known as transduction, has undergone major advances in recent years. Now at the cutting edge of modern medicine, viral vector-based therapies have many applications, including the treatment of:

AAVs are commonly used vectors due to their ability to transduce a wide range of species and tissues in vivo with no evidence of toxicity.4 Moreover, there are modified AAVs available that do not integrate into the host genome. Thus, they are suited for transient as well as stable approaches. However, the human immune system sometimes rapidly recognizes AAVs and destroys them before they reach the target. AAVs are, therefore, mainly used when direct injection into the target tissue is possible. To overcome this disadvantage, so-called ancestor AAVs (ANC-AAVs) have been developed. Carrying surface proteins similar to older AAV variants, ANC-AAVs are not recognized by the patient’s immune system and can therefore be applied by intravenous injection. However, one disadvantage of AAVs persists: they are not suited to carrying payloads above 5 kb.

Adenoviruses provide a very effective means of in vivo delivery. This is due to several factors, including high host cell infection efficiency for many cell types, both dividing and non-dividing. However, as for all viral transduction tools, safety aspects and the costs of GMP-grade viruses represent a severe disadvantage for viral methods, especially for ex vivo gene therapies where non-viral alternatives can be used.

The transduction of host cells with viral vectors has a relatively high efficiency compared to non-viral methods. However, challenges of immunogenicity and cytotoxicity have led to an increase in the use of non-viral gene delivery vectors for ex vivo processes.5 In addition to safety benefits, non-viral methods also offer the advantages of easier preparation, the ability to transfer larger genes, and considerably improved transfection efficiencies. Furthermore, non-viral methods expand the modification modes to other substrate types such as mRNA or protein (e.g. CRISPR RNPs) and thus have better control over the modification.

Non-viral gene delivery is conducted by physical or chemical methods. Physical methods involve the transient penetration of cell membranes by applying a physical force, such as electro-poration, whereas chemical methods use natural or synthetic carriers, such as cationic liposomes and polymers, to transport therapeutic genes into targeted cells. Although all of these methods are used in basic research, only a few (NucleofectorTM Technology for example) are suitable for a broad variety of cell types and have the capability to be used for the GMP-compliant manufacturing of Ad-vanced Therapy Medicinal Products (ATMPs).

In recent years, cell and gene therapy technologies have been gaining traction across multiple therapeutic areas. Prominent examples include the development of CAR-T cell therapy, i.e., the use of CARs to redirect T lymphocytes towards cancer cells. Although relatively new, CAR-T therapy is showing considerable success for the treatment of hematopoietic malignancies such as acute lymphoblastic leukemia, chronic
lymphocytic leukemia, lymphoma, and multiple myeloma.6

It may soon be possible to use CAR-T cell therapy to also treat solid tumors.7 This is due to innovative methods of modifying CAR-T cell design, new delivery mechanisms and
the use of CAR-Ts in conjunction with other drugs and therapies (figure on the right side).

Therapies based on CAR-NK cell therapy may prove to be a better alternative to CAR-T cells for the treatment of solid tumors. In addition to their suitability for allogeneic approaches, since NK cells do not cause Graft vs Host disease, the short lifespan of NK cells allows effective antitumor activity while reducing long-term adverse effects. The genetic modification of NK cells with CARs to enhance their inherent ability to fight tumor cells is a rapidly growing area of research. Clinical trials for CAR-NK cell therapy are currently ongoing for both hematological and solid tumors, including leukemia, glioblastoma, prostate cancer, and ovarian cancer.

Another cell therapy technology that is rapidly advancing is the use of iPSCs. Due to their embryonic stem cell-like capabilities, iPSCs are a powerful tool for many developmental or disease-related applications. They can be “made” from a person’s own skin or blood and reprogrammed to provide a source of patient-specific, genetically identical cells that would not be rejected by the immune system.

"Off the Shelf" Cell Therapy Technologies

One of the keys to unlocking the full potential of CAR cell therapy tools could be the creation of ‘off the shelf’ treatments. In other words, moving away from labor-intensive and costly patient-specific autologous therapies, towards allogeneic solutions based on cells taken from healthy donors, that can be manufactured on an industrial scale and used to treat multiple patients. Several technologies, some of which are mentioned above, are emerging as possible tools to meet this challenge.

In the past, genome modification using technologies like zinc-finger or TALEN was labor intensive and costly. This disadvantage is no longer an issue due to the rise of gene editing with Clustered Regularly Interspaced Short Palindromic Repeats (CRISPR). CRISPR-based genome editing is now becoming a standard method in gene therapy, as it allows site directed knock-out or knock-in modifications of defective genes. Such approaches are being used to find genetic treatments for AIDS and beta-thalassemia, among other diseases. 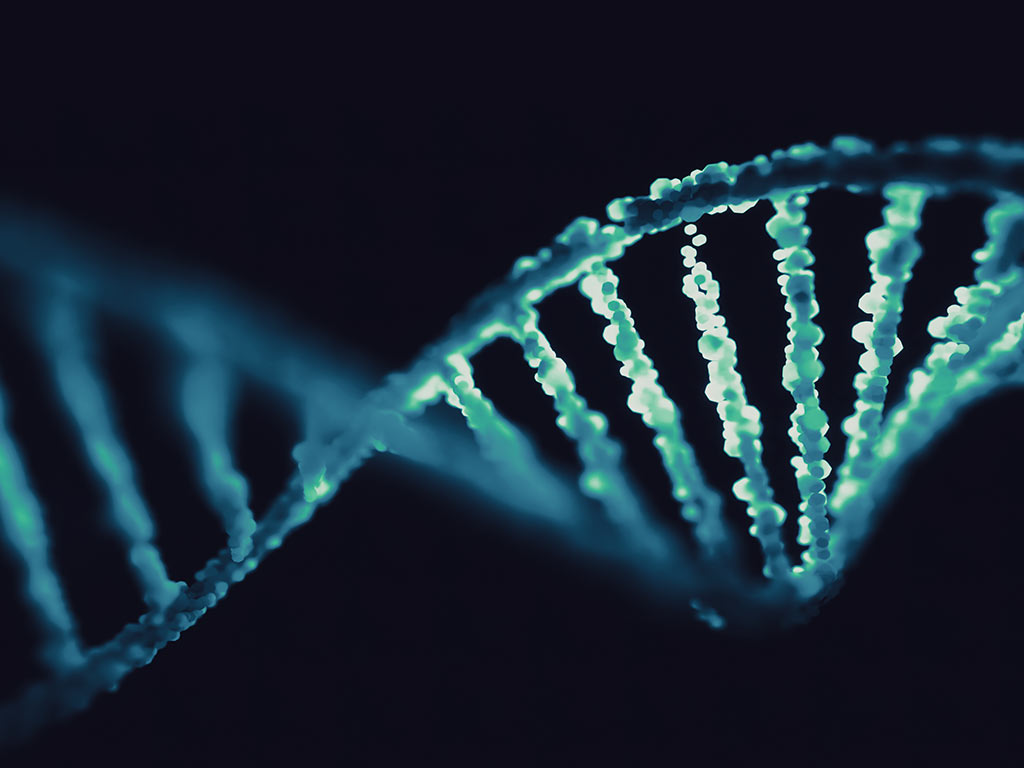 CRISPR is Editing its Way Toward Cell and Gene Therapy

Learn about CRISPR from discovery to cell and gene therapies, covering topics such as finding therapeutic pathways or process development considerations for bringing gene edited therapies to the clinic. 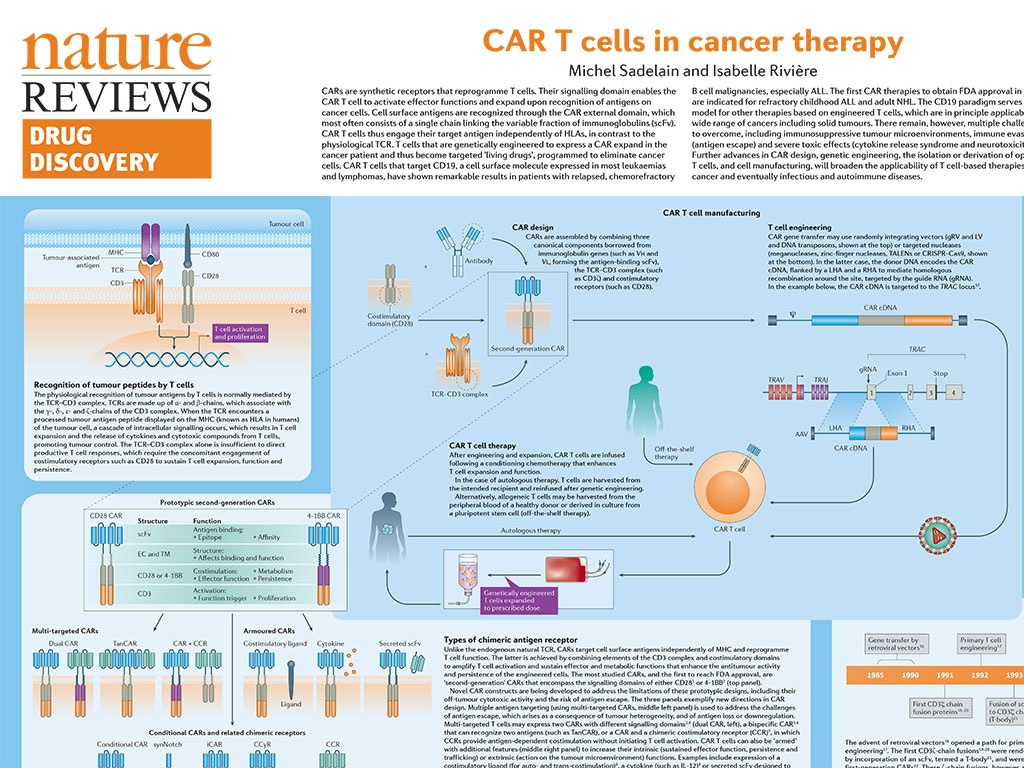 T cells engineered to express chimeric antigen receptors (CARs) are 'living drugs' designed to eliminate cancer cells. Lonza has sponsored a poster, published by Nature Reviews Drug Discovery, which shows an overview of the different ways to design and generate CAR T cells and the journey to FDA approval in 2017. 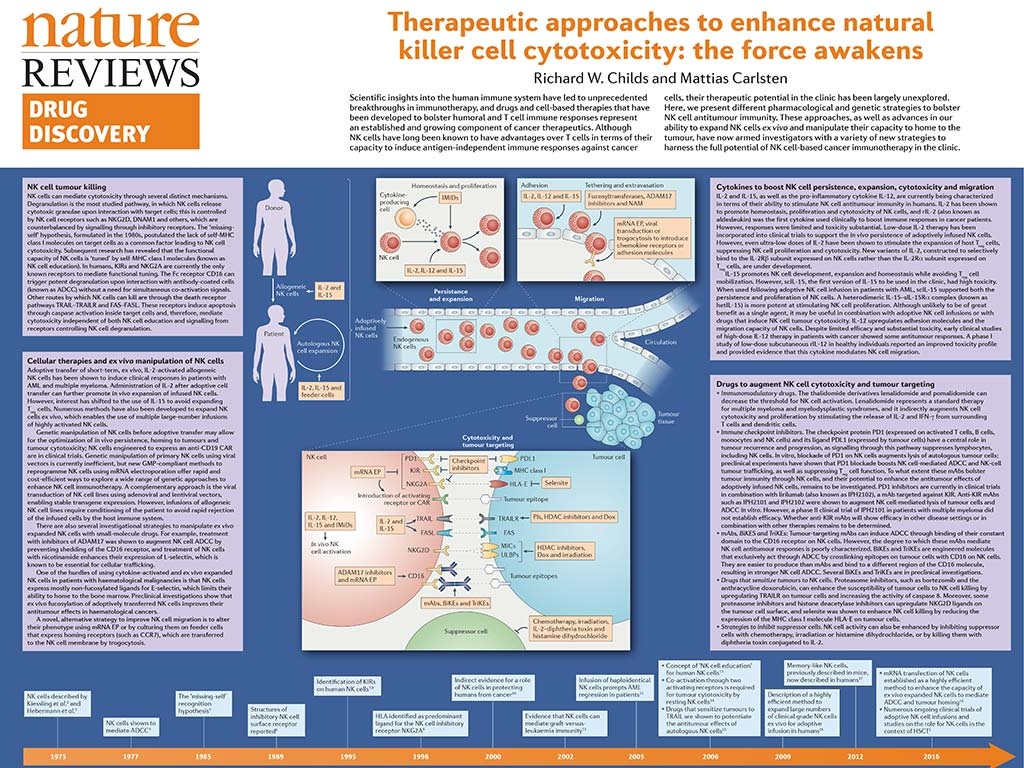 Natural killer (NK) cells are emerging as attractive candidates for new immunotherapeutic approaches – they have the potential to induce powerful antigen-independent immune responses against malignancies.

Cell and gene therapies are transforming how patients with cancer and genetic diseases are treated. Although the therapeutic opportunities for patients are promising, the stakes for drug developers are high. Companies wishing to scale up the manufacture of cell and gene therapy from translational research to the clinical trials phase must address complex challenges. For example, scaling up production under GMP conditions or dealing with regulatory bodies. Additionally, smaller operations may experience further inefficiencies and costs owing to paperwork-heavy compliance processes.

Your Path from Discovery to Commercialization – We'll Walk it Together

At Lonza Pharma & Biotech, we are passionate about helping you accelerate the development of cell and gene therapies to get new treatments to patients faster.

Our scientists and engineers are dedicated to developing new technology platforms that are specifically designed to increase pipeline efficiencies. Our portfolio of research and manufacturing media, non-viral transfection technologies and primary cells, support you through every step of the cell and gene therapy process.

Together with our Cell and Gene Therapy Development and Manufacturing Services, we can help you successfully navigate the path from early discovery to commercialization, and make your journey as easy as possible.

Discover our Products and Services for Cell and Gene Therapy

Our portfolio of research and manufacturing media, non-viral transfection technologies and primary cells, supports you through every step of the cell and gene therapy process. 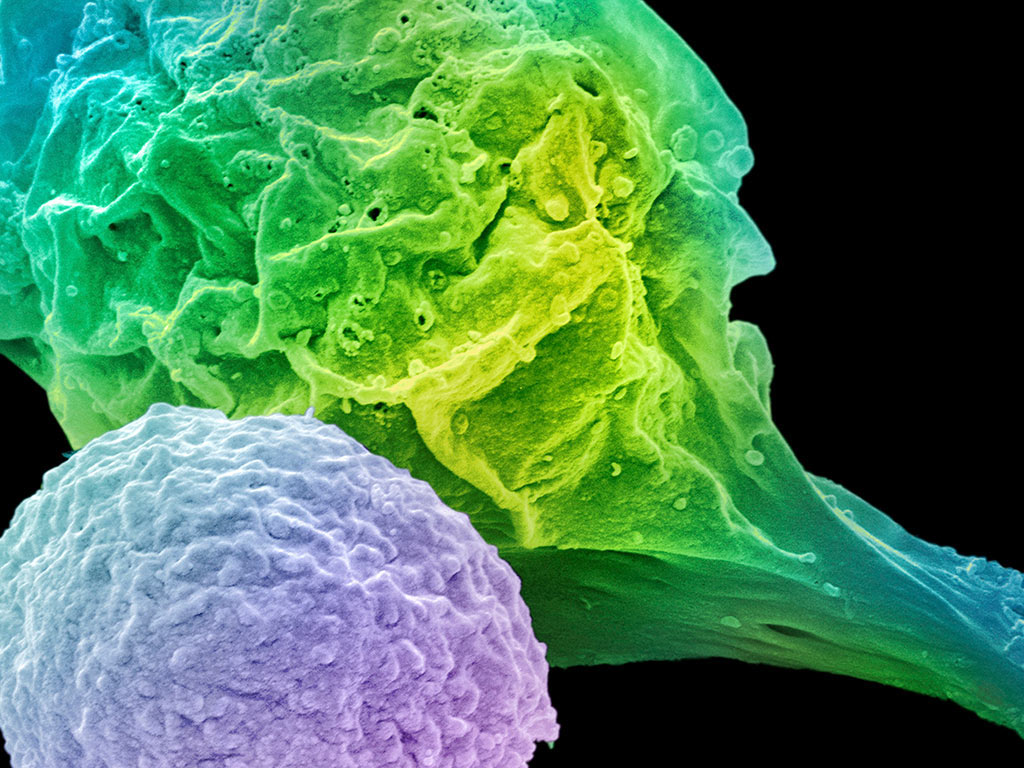 Download our free brochure and discover how teaming up with one experienced partner can help you to successfully navigate the path from early discovery to commercialization.

Would you like to discuss your needs with one of our experts? Set up your personal meeting.