Blood is a liquid mixture comprised of plasma, cells and proteins. The liquid portion, plasma, makes up half of the blood volume, and cells the other half.

Types of blood cells include red blood cells (RBCs) that carry oxygen to tissues, platelets that help blood clot, as well as peripheral blood mononuclear cells (PBMCs) and granulocytes, which help fight infection.
PBMCs are a mixed population of myeloid and lymphoid cells. The below figure illustrates the cellular composition of whole blood as well as the various myeloid and lymphoid cells.

PBMCs are a mixed population of myeloid and lymphoid cells. The myeloid cells include monocytes, dendritic cells, and macrophages. Monocytes circulate through the blood to different tissues, where they differentiate into tissue-resident macrophages and dendritic cells.

Macrophages are the Pac-Man cells of the immune system that engulf and destroy foreign substances and cancerous cells. There are resident macrophages that maintain a steady-state of general tissue repair. In addition, there are also other macrophages that are created through a specific immune response to target and destroy specific foreign cells.
Similar to macrophages, dendritic cells also engulf and destroy foreign cells in their immature state. As dendritic cells mature, they turn from destruction to processing and presentation of foreign antigens to T cells. Thus, dendritic cells are also aptly called antigen-presenting cells (APCs).
Lymphocytes include B cells, T cells, and Natural Killer (NK) cells. B cells are involved in the humoral, or antibody-mediated adaptive immune response, and are defined by the B cell receptor (BCR) on their cell surface. There are B cell subsets that are responsible for producing antibodies, acting as APCs, releasing signaling proteins, and differentiating into memory B cells.
Conversely, T cells are involved in the cell-mediated adaptive immune response and are defined by the T-cell receptor (TCR) on their cell surface. There are also different subsets of T cells, which are responsible for acting as “helper” cells (CD4+ T cells), cytotoxic cells (CD8+ or CTLs), memory cells (TCM or TEM), suppressor/regulatory cells (Treg), and natural killer T (NKT) cells.
Similar to CTLs and NKT cells, NK cells also play a cytotoxic role. CTLs and NKT cells require presentation of a major histocompatibility complex (MHC) in order to recognize and respond by secreting apoptotic cytokines to destroy the foreign cell. However, NK cells do not require MHC presentation in order to recognize and destroy. Thus, they can be considered immune system first responders.
Isolating PBMCs is a common primary step in purifying individual immune cell types. Plasma, PBMCs, and RBCs all have different densities, making them relatively easy to separate using a density gradient reagent.
Briefly, whole blood is diluted, layered over the density gradient reagent, and then centrifuged. During centrifugation, the cells separate based on their density, leaving behind visible layers with distinct cell populations (see image below). The mononuclear layer is often times called the “buffy coat”. 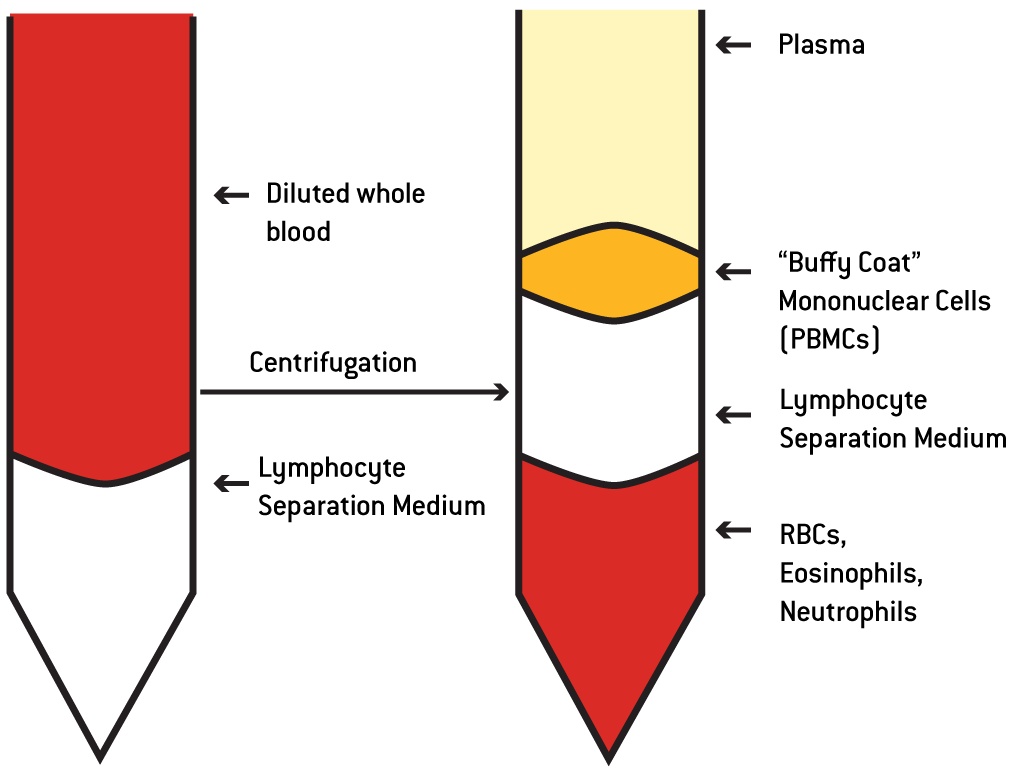 Depending upon research needs, you are then able to collect the different cell populations and either use directly or isolate specific cell types contained in the PBMC mixture. Individual cell types can be isolated from PBMCs either through immunomagnetic separation or FACS (fluorescence-activated cell sorting) techniques.

After isolation, it is best to characterize the cells you have isolated to be sure they are a pure population of the correct cell type. Characterization can include phenotypic as well as function analyses. Flow cytometry phenotypic characterization is well accepted, and is our method of choice at Lonza.
There are many commercially available immunomagnetic separation kits as well as characterization kits available. However, these kits are time consuming and can be labor intensive. In addition, in order to be sure you have the correct purity and cell type, you must take the time and energy to properly characterize your cells.

Unless you have expertise with and access to a flow cytometer, you are left to rely on the manufacturer’s claims in terms of kit performance and cell type isolated.

Alternatively, you can skip the hassle of isolation and characterization by purchasing commercially purified and characterized cells.
Lonza is committed to providing you with a readily available, consistent source of purified and characterized peripheral blood cells, including PBMCs, CD14+ monocytes, dendritic cells, CD4+ T cells, and natural killer (NK) cells.
If you are working with other blood cell types, you can likely purify or differentiate your cell of interest from Lonza cryopreserved PBMCs.
In addition, if you have high volume cell needs, our CellBio custom cell isolation service may be your solution.
Please contact Scientific Support with questions about the Lonza peripheral blood immune cell portfolio.
Back to Immunotherapy and Hematopoietic Knowledge Center Home
We use cookies to deliver the best service to you. By continuing to browse the site, you are agreeing to our use of cookies.Ok