An Introduction to Cell Assays and Analysis

Cell-based assays and analysis are vital experimental tools in life science research and biomanufacturing. They are based on cell culture methods, where live cells are grown in vitro and used as model systems to assess the biochemistry and physiology of both healthy and diseased cells. Cell culture assays provide a means of quantitatively analyzing the presence, amount, or functional activity of a cell or tissue of interest.

As cost-effective and reproducible research tools, both standardized and custom-made cell-based assays are widely used by scientists in numerous applications. For example, cell culture assays are essential in preclinical drug discovery, with recently emerging technologies such as three-dimensional cell cultures and pluripotent stem cells helping to enhance compound efficacy and toxicity screening predictivity.

In the following sections we explore some key applications of cell-based assays and cell analysis, such as cell health assays and high-throughput screening assays for drug discovery.

Discontinuation notice: The CytoSMARTTM System for cell culture monitoring has been discontinued as of 31 Dec, 2019. Please visit Cytosmart Technologies BV for purchase and continued support.

The accurate assessment of cell health is critical for monitoring the bioprocesses of in vitro cell cultures across a wide range of research applications. Cell health bioassays that assess the viability and growth of cultured cells can help determine optimal culture conditions, as well as the suitability of the cell culture as a reliable and reproducible model for your research. Cytotoxicity assays can also uncover mechanisms or pharmacological compounds that impair cell health. This helps determine pathological pathways in disease research and to detect potentially harmful compounds during toxicity screening.

In the sections below, we look at different cell-based assays and products that can enhance and expedite your cell culture health assessments. This includes our cytotoxicity and proliferation bioluminescent assays, as well as our white walled cell culture plates that are designed specifically for use with these assays.

Assessing the proliferation (growth) and health of your cell cultures, including during compound screening, involves measuring certain parameters such as viability and toxicity. We offer three different highly sensitive and ready to use assay kits that have been developed to safely, quickly and easily assess cell death and proliferation in your cell cultures using bioluminescent markers. These kits can be used with adherent or suspension cell cultures consisting of either primary cells or cell lines. They are also scalable for high-throughput applications. 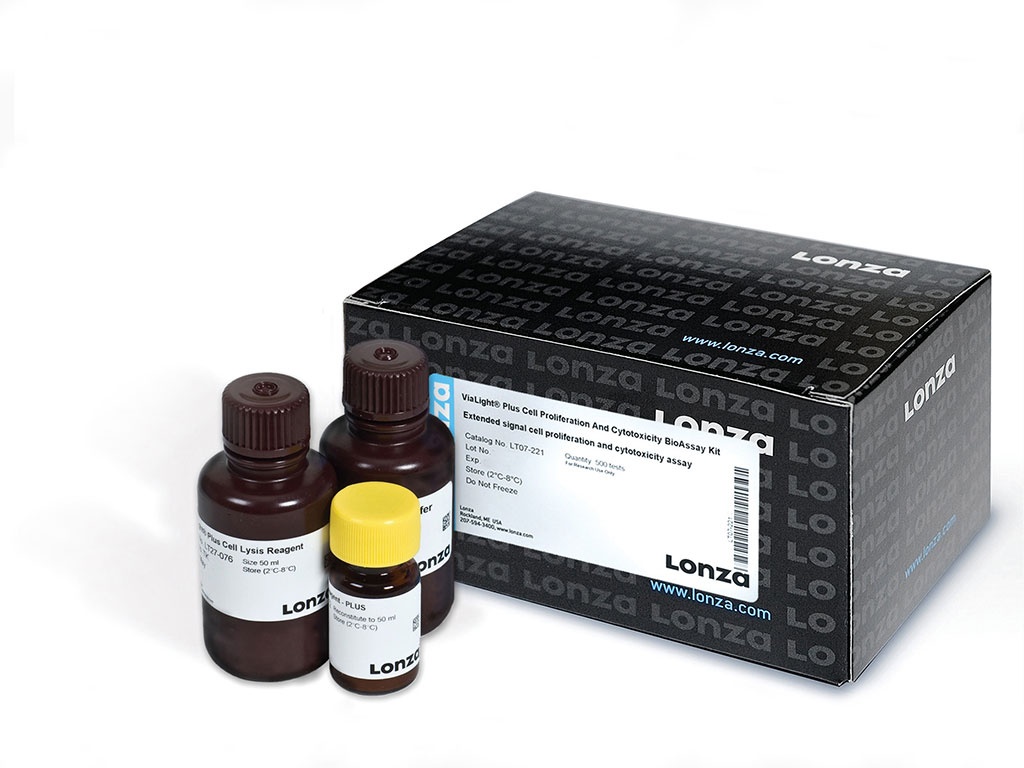 The ViaLightTM Plus Cell Proliferation and Cytotoxicity BioAssay Kit provides the ability to safely and quickly measure proliferation and cytotoxicity of mammalian primary cells and cell lines in culture. The ViaLightTM Assay incorporates bioluminescent detection of cellular ATP as a measure of viability and can be used to assess the functional integrity of cultured cells.

ViaLightTM Plus offers many advantages over conventional methods such as ease-of-use, higher sensitivity, greater reproducibility, and no radioisotopes required. In addition, the kits have been formulated for use with a micro titre plate reading luminometer for full automation of the assay. Microplate beta counters and tube luminometers are also compatible.

If you would like to learn more or request a quote, visit the ViaLightTM Plus Cell Proliferation and Cytotoxicity BioAssay Kit product page.

1  of
Only registered User can view this video. Please login or create an account.
ViaLightTM MDA Plus Microbial Proliferation and Cytotoxicity Bioassay Kit

The ViaLightTM MDA Plus Microbial Proliferation and Cytotoxicity Bioassay Kit is intended for the rapid measurement of viable microbial cell number in your culture. The kit uses ATP bioluminescence and is rapid, sensitive and highly reproducible. The ViaLightTM MDA Plus Kit has extended signal stability and can detect down to 1000 bacteria or 100 yeast per well in a 96 well plate. Kits are optimized and formulated to ensure complete lysis of microbial cells in culture. Quickly and easily, perform assay on entire 96 well plate in less than 15 minutes.

Cell-based assays are a key component in drug discovery and development. In preclinical research, cell culture assays are frequently used to determine the efficacy and toxicity of candidate drug compounds. For example, a variety of cell-based assays for studying cell migration are helping to develop novel cancer treatments, such as invasion assays and the tube formation assay. Cytotoxicity assays can also help to detect potentially harmful compounds during safety toxicity screening, with our ViaLightTM and ToxiLightTM Assay Kits helping to expedite this process.

Reproducible, reliable and cost-effective cell-based assays are showing promise in accelerating and enhancing drug development3. Functional cell-based assays can enable high-throughput compound screening (HTS) to advance drug discovery success. Their distinguishing feature is that they measure the functional behavior of the cell of interest in response to the candidate compound. They have become an essential tool in drug discovery, enabling HTS for more efficient compound library analysis and the earlier identification of promising candidate compounds to expedite drug development.

We offer various cell function assays that target clinically relevant enzymes and bone and adipose cells, which have been specially developed for HTS environments. We describe these different assays and their applications in HTS drug discovery in the following sections.

3An and Tolliday 2010 Molecular Biotechnology 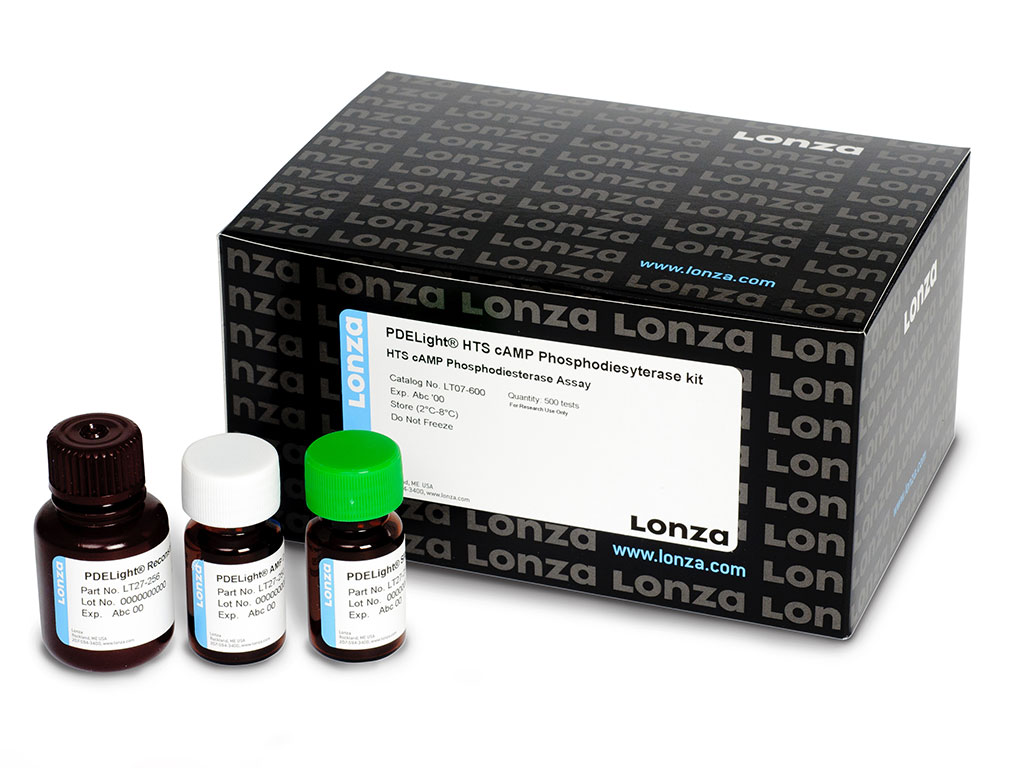 We have developed two assays to detect therapeutic enzyme targets, including phosphodiesterases and cyclases. Both are homogeneous, highly sensitive and non-radioactive luminescence-based assays with significant relevance to drug discovery.

Cell culture assays for the detection of phosphodiesterase (PDE) are essential for reliable HTS. PDE is a group of enzymes that break down two of the most important signaling molecules in cells, cAMP and cGMP, which underlie many cellular processes crucial to our health. As such, PDE is a crucial therapeutic target. PDE-targeted drugs already provide treatment for various diseases, including neurodegenerative disorders4 and heart failure.5 PDEs are also associated with off-target side effects of various drugs6, so profiling PDE is also crucial step in the development of both PDE- and non-PDE-targeted drugs. Our PDELightTM HTS cAMP Phosphodiesterase Bioassay Kit provides a simple, robust and rapid measurement of phosphodiesterase (PDE) activity. When PDE is present, it breaks down cAMP into AMP, which is converted into ATP. The PDELightTM Assay Kit uses bioluminescent detection of this ATP in your cell cultures, emitting nearly one photon of light for every ATP molecule produced. If you’d like to learn more or request a quote, visit the PDELightTM HTS cAMP Phosphodiesterase Assay Kit product page. 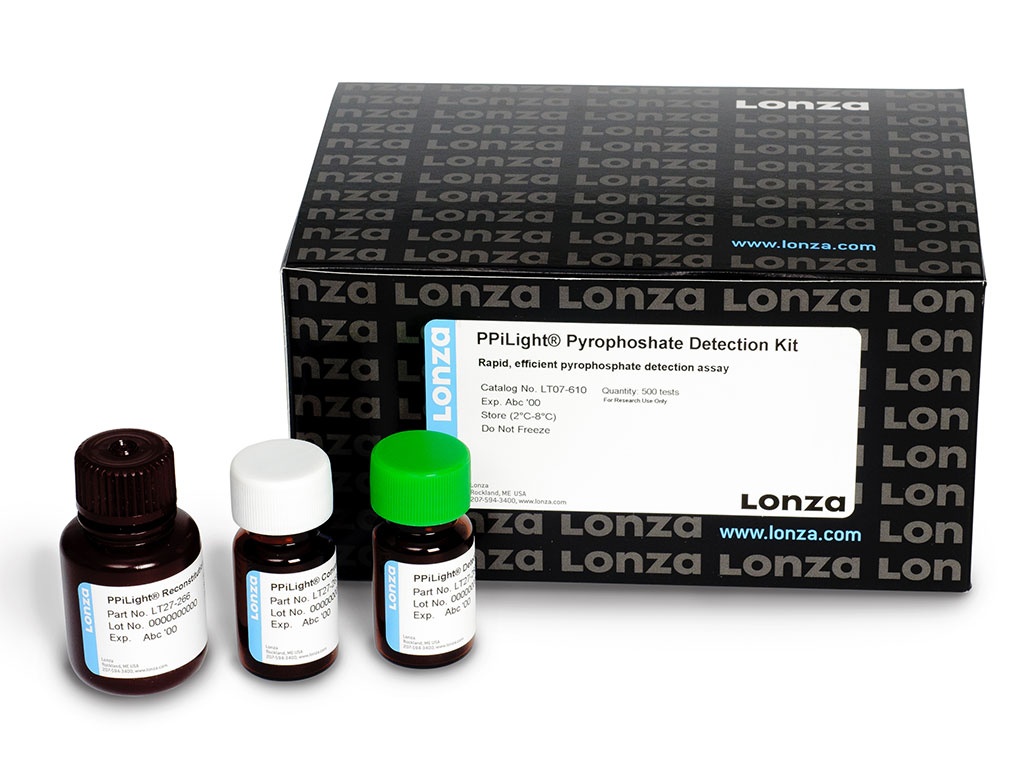 Identifying the presence of inorganic pyrophosphate (PPi) is vital for HTS drug discovery. PPi is a small molecule generated from a variety of enzymes, including from cyclases. Cyclases have key regulatory roles in all cells and underlie various pathologies, such as obesity and cardiopulmonary disease, stimulating the development of various cyclase-targeting drugs. Some cyclases, such as adenylyl cyclases, could also be useful drug targets themselves.7

Our PPiLightTM Inorganic Pyrophosphate Bioassay offers a versatile, simple (two-step) and fast method for identifying PPi using a bioluminescent marker. In the presence of PPi, the detection reagent catalyzes the conversion of AMP into ATP. The PPiLightTM Assay uses luciferase to produce light from the newly formed ATP and luciferin, offering a wide detection range from 0.02µM to 10 µM. As well as its application in the measurement of cyclases, the PPiLightTM Assay can also measure the activity of various other clinically relevant enzymes, including phosphotransferases, pyrophosphotases, ligases, hydrolases and DNA Polymerases.

If you’d like to learn more or request a quote, visit the PPiLightTM Inorganic Pyrophosphate Bioassay product page. 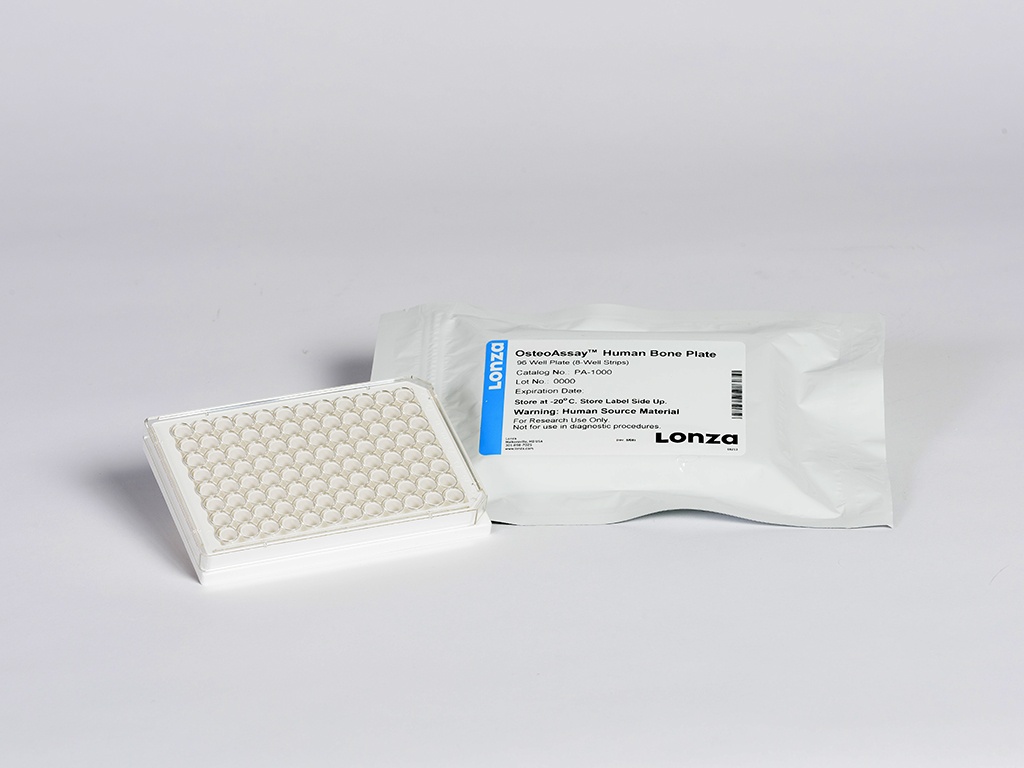 1. OsteoAssayTM Human Bone Plate: This novel, ready to use assay contains real human bone that can be seeded onto the surface of the OsteoAssayTM plate, on which you can culture primary human or non-human osteoclasts, osteoclasts precursors or immortalized cell lines.

Cells can be stained with standard cytochemical (e.g. TRAP) or immunofluorescent techniques. The production of bone resorption-related products (e.g. collagen peptides) and/or enzyme activity can be measured by sampling the cell culture supernatant after an appropriate period of cell culture.

2. OsteoLyseTM Bone Resorption Assay Kit: This assay provides an easy to use protocol for quantitatively measuring in vitro osteoclast-mediated bone resorption in a high-throughput format. Osteoclasts can be seeded onto the OsteoLyseTM plate using traditional cell culture protocols. As Europium-labeled collagen fragments are released into the cell culture, a Fluoropore Releasing Reagent uses time-resolved fluorescence to indicate the resorptive activity of the osteoclasts. If you’re interested in reading more, visit the OsteoLyseTM Bone Resorption Assay Kit product page.

This assay provides a rapid, fluorescent in vitro assay for assessing bone cell mineralization. In less than 90 minutes, it can quantitate in vitro mineralization by osteogenic stem cells, primary osteoblasts, and osteoblast-like cell lines. The OsteoImageTM Staining Reagent fluoresces to indicate when it binds to bone mineral (hydroxyapatite) produced by the bone-like nodules of the cultured cells. This method is sufficiently sensitive to detect time-dependent increases in mineralization in differentiating cells. As well as the quantitative plate reader results, fluorescent microscopy of the cell cultures can also provide qualitative visual data. Read more on the OsteoImageTM Bone Mineralization Assay product page. 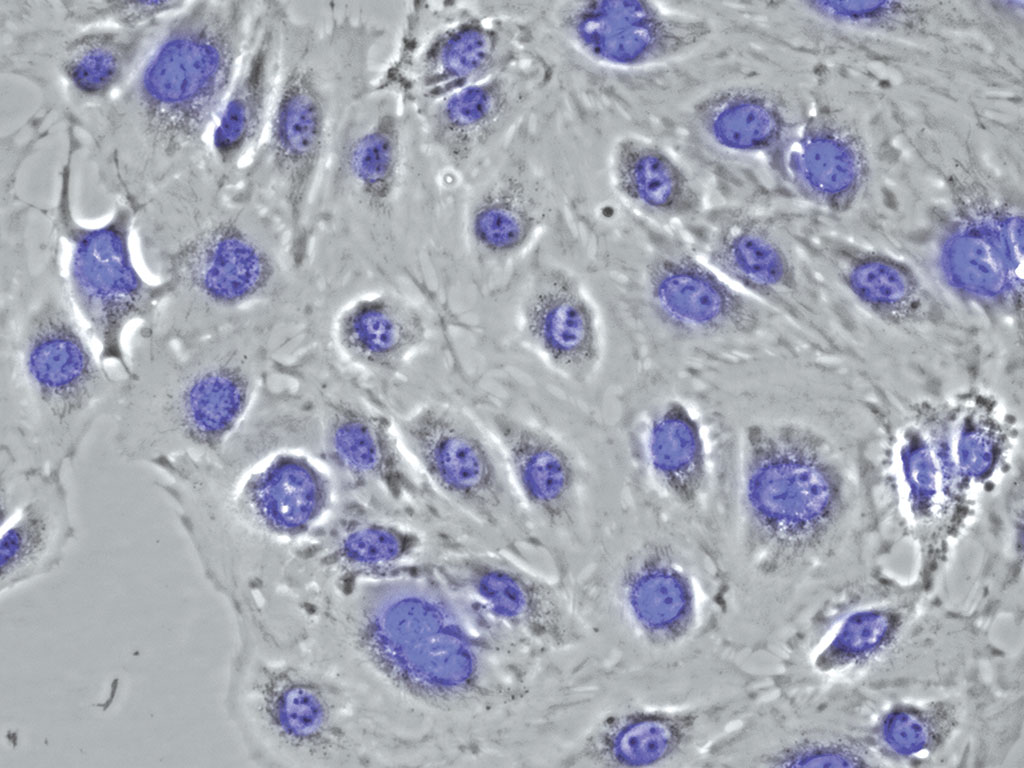 Find out the differences between primary cells and cell lines. What are common concerns are associated with the use of cell lines? Interested in different applications primary cells are used for?

Read more
We use cookies to deliver the best service to you. By continuing to browse the site, you are agreeing to our use of cookies.Ok