To add to the complexity, each pathogen has a different composition of antigens that could be presented to naïve T cells. This means there is not only a large number of CD4+ T cell subsets responsible for specific roles, but also subsets of these subsets which are responsible for managing any particular pathogen. In addition, some T cells are like transformers in that they are able to toggle between different subtypes, making them a force to be reckoned with, even in an extreme infection environment.

Naïve CD4+ T cells are activated by APCs to produce T helper (Th) cells, regulatory T cells (Tregs), and follicular helper T cells (TFH).
The Th cells can be Th1, Th2, Th9, Th17, or Th22 cells, depending upon the pathogen and types of cytokines present in the cellular microenvironment. They are responsible for responding to both intracellular as well as extracellular pathogens and have also been found to be involved in various diseases.
Tregs are responsible for maintaining self-tolerance so host cells remain safe from immune attack, while the follicular helper T cells (TFH) are responsible for helping B cells produce pathogen specific antibodies.
Each subset can be characterized by expression of various cell surface markers as well as the cytokines it produces.
The figure below illustrates different CD4+ T cell differentiation paths and their respective phenotypic differences. Cell surface markers are listed on the top half of each cell type and cytokine expression profile on the bottom half, annotated by an asterisk (*). The cytokines responsible for inducing each cell type are represented by an arrow pointing from the naïve cell to each respective effector CD4+ helper T cell subset. 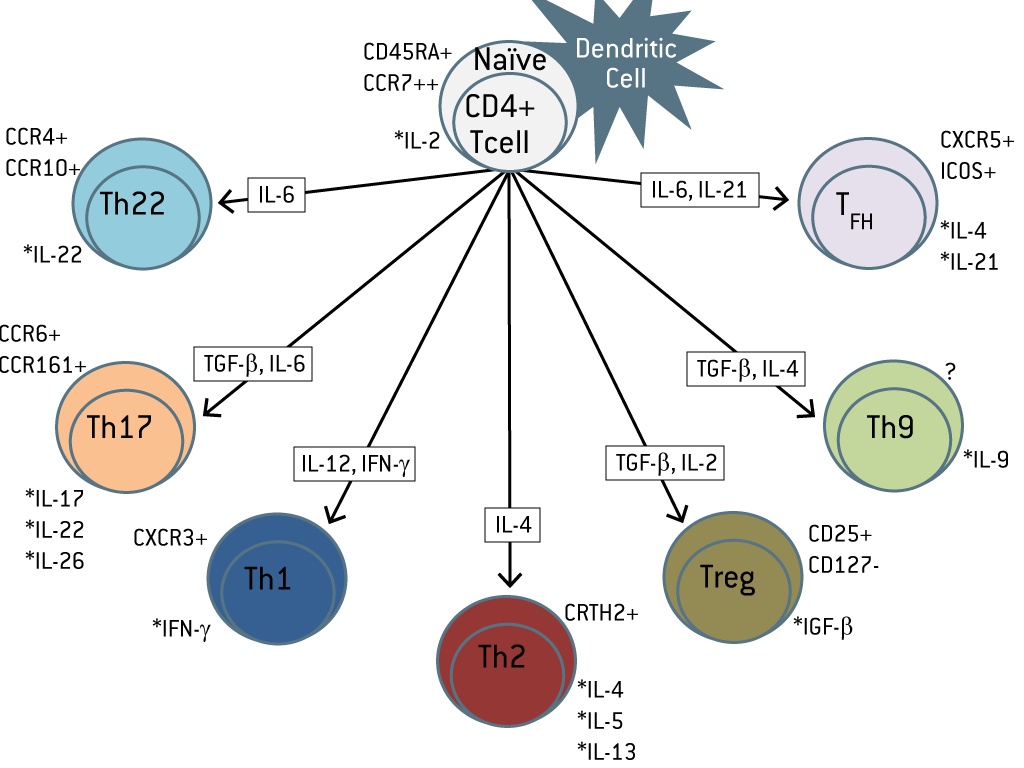 The immune system is an intricate and fascinating network of many different cell types and signaling molecules that work together to protect the human body against foreign pathogens.

Lonza CD4+ T cells are a mixture of all the various subsets present in the donor at the time of blood draw. If you are interested in a particular T cell subset, you can use Lonza CD4+ T cells to isolate the subset via immunomagnetic separation or FACS (fluorescence-activated cell sorting).

Please contact Lonza Scientific Support for more information. In addition, if you have large volume needs, we may be able to do custom cell isolations through our CellBio Services Custom Research Solutions.
Back to Immunotherapy and Hematopoietic Knowledge Center Home
We use cookies to deliver the best service to you. By continuing to browse the site, you are agreeing to our use of cookies.Ok