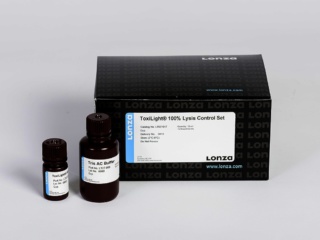 The ToxiLightTM BioAssay Kit is a bioluminescent, non-destructive cytolysis assay kit designed to measure the release of the enzyme, adenylate kinase (AK), from damaged cells. AK is a robust protein present in all eukaryotic cells, which is released into the culture medium when cells die. The enzyme actively phosphorylates ADP to form ATP and the resultant ATP is then measured using the bioluminescent firefly luciferase reaction. As the level of cytolysis increases, the amount of AK in the supernatant also increases, which results in emission of higher light intensity by the ToxiLightTM reagent. Because the ToxiLightTM BioAssay Kit exploits the fact that AK is released from cells when they die, there is no need for cell lysis (unlike many other cytotoxicity assays). Repeated samples of supernatant can therefore be taken over time without disrupting the cells themselves. This allows for kinetic analysis of cell death.

The ToxiLightTM BioAssay Kit also facilitates high content screening by allowing other tests to be performed on the original cells.

All the components required for AK detection are contained within a single reagent making the assay very simple to perform. The kit provides outstanding sensitivity with a detection limit of 10 cells per microwell with a dynamic range of over 5 orders of magnitude. Extended signal stability also makes the assay suitable for batch processing in high-throughput screening applications.'

The ToxiLightTM 100% Lysis Reagent set is intended for use with the ToxiLightTM Non-destructive Cytotoxicity Assay and is designed to give the user a 100% lysis or total adenylate kinase control. It contains the 100% Lysis Reagent, 10 ml and Tris-Acetate Buffer, 50 ml (required volume correction for sample wells), and is suitable for 200 tests in a 96 well format.

Simply add the 100% Lysis Reagent to the control wells at a ratio of 1:2 (lysis reagent : sample volume), volume correct the remaining sample wells with Tris-Acetate Buffer and then incubate at room temperature for 10 minutes. The ToxiLightTM 100% Lysis Reagent should be included as a control at each time point within your cytotoxicity assay. After addition proceed with the standard ToxiLightTM Assay protocol. 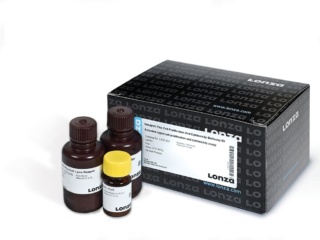 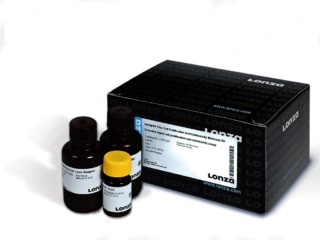 View topics
We use cookies to deliver the best service to you. By continuing to browse the site, you are agreeing to our use of cookies.Ok