What is Low Endotoxin Recovery (LER)?

A Controversial Topic Since 2013

Low Endotoxin Recovery (LER) is a controversial topic that has been circulating throughout the endotoxin detection community for the last years. This phenomenon is hypothetically described as a “masking effect” manifested in the biophysical formation of a complex that blocks the ability of Factor C, the main component in LAL detection, to bind endotoxin (J. Chen, Low Endotoxin Recovery in Common Biologics Products, presented at the 2013 Annual PDA Meeting, Orlando, FL, April 2013).

Two common drug excipients, polysorbate and citrate, have been identified as probable causes of the masking effect more commonly referred to as LER. These substances are estimated to be used in more than 70% of protein formulations (Maggio, 2012). There is also some evidence that phosphate-containing formulations may also be affected by LER. However, the LER effect has only been observed in combination formulations of the aforementioned excipients, and not in individual raw materials.

FAQs and White Papers about LER

Learn about what LAL manufacturers are doing to help solve the Low Endotoxin Recovery (LER) mystery. 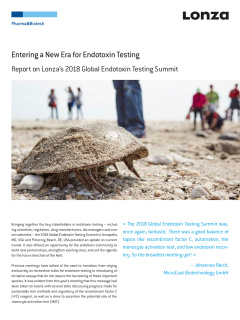 White Paper Report provides an update on current trends from the key stakeholders in the endotixin testing community, gives details on the key topics discussed, and looks at what the future holds for endotoxin testing.

Endotoxin Expertise At Your FingertipsTM

QC InsiderTM Toolbox is packed with comprehensive support tools that will help you perform the bacterial endotoxins test. It has been created by QC experts who face many of the same regulated manufacturing challenges as you do.

Become a QC InsiderTM Expert now
We use cookies to deliver the best service to you. By continuing to browse the site, you are agreeing to our use of cookies.Ok