What Is Inflammatory Bowel Disease?

Inflammatory Bowel Disease (IBD) is an autoimmune disorder that causes chronic inflammation throughout all or part of a person’s gastrointestinal (GI) tract. Two primary subsets of the disorder are Crohn’s Disease (CD) and Ulcerative Colitis (UC). Although sufferers experience many of the same symptoms, one main differentiating factor between the diseases is where in the body they can strike. CD symptoms can manifest in any portion of the GI tract, while UC effects are limited to the colon (1). 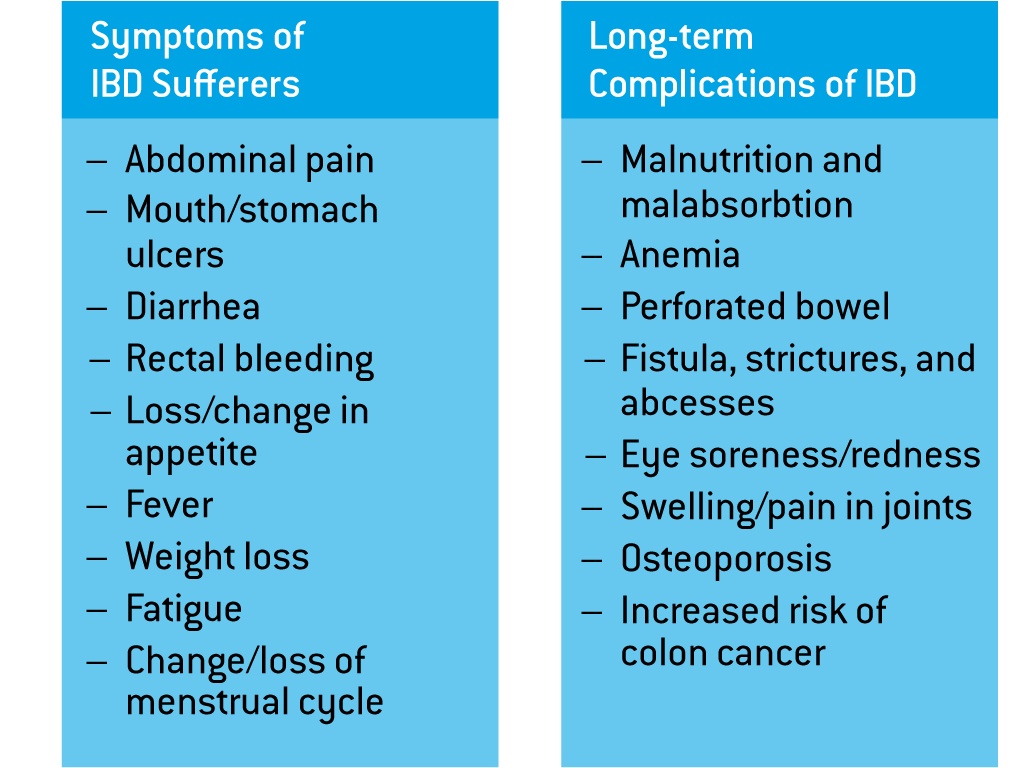 Individuals with IBD experience chronic, painful, and often humiliating GI-associated symptoms (Figure 1: Symptoms and long-term complications associated with IBD) that can lead to a substantial decrease in their quality of life.  Chronic inflammation of portions of the GI tract associated with IBD, if allowed to go unchecked, can lead to severe complications such as malnutrition, colon cancer, intestinal fistulas and ruptures. Additionally, a correlation exists between more severe courses of the disease and earlier onset (2).

While the exact cause of IBD remains unknown, it is commonly thought to be a combination of three factors (Figure 2: Contributing factors of IBD). According to the CCFA, various environmental agents, genetic predispositions, and dysfunctional immune responses are all thought to play a role in triggering the onset of IBD.

How Common Is IBD?

Over 1 million residents in the USA and 2.5 million in Europe are estimated to have IBD (Kaplan, 2015). Even though data from developing countries is limited, the incidence and prevalence of IBD is increasing with time and in different parts of the world, indicating its emergence as a global disease (Molodecky et al., 2012). This being the case, it is highly likely that you may already know someone personally suffering from or affected by IBD.

While certainly a global issue, the highest prevalence of disease can be found in North America, Europe, and Australia (Kaplan, 2015). Other estimates from the CCFA indicate that a staggering 70,000 new diagnoses of IBD occur each year in the United States alone. And, despite incidence being significantly lower in children, roughly 80,000 kids are currently living with IBD.

There is currently no cure for IBD. Depending on the severity of the disease, often mild cases can be treated by altering your diet, reducing stress, and quitting smoking (3). There does not however, seem to be a universal solution that works for all IBD sufferers. Oftentimes, medication is required to reduce inflammation and obtain remission of IBD when altering a patient’s lifestyle is not sufficient.

There are currently 5 classes of medications used to treat IBD (Figure 3). Biologics are the most recent treatment and are only used for patients with moderate to severe cases not responding well to other therapies. In Crohn’s disease, it has even been shown that a combination of biologic and immunosuppressant therapies are the most effective for achieving and maintaining remission (Hazlewood et al., 2015).

However, “The widely variable rates of response (or lack of response) seen with these newer agents underscore the complex pathophysiology and heterogeneity of IBD.  New forms of therapy are urgently required to address the needs of this population.” (Raad, Chams, & Sharara, 2016). Additionally, some people with certain conditions like Hepatitis C are unable to take TNF-A drugs as it may lead to a relapse of disease while undergoing treatment.

The role of our immune cells in the inflammation pathway has been a new target for IBD therapies in recent years. Research has shown that activation of certain pro-inflammatory signal transducer and activator of transcription (STAT) pathways in T cells of the mucosal lining can induce an inflammatory response (Neurath, 2014).
Due to these phenomena, cytokine blocking compounds like Tocilizumab and Ustekinumab have been developed and are already showing success in blocking the immune response. Tocilizumab, for example, accomplishes this by specifically targeting interleukin IL-6 and STAT pathways associated with inflammation caused by pathogenic T cells. Numerous other compounds targeting “various aspects (interleukins 6, 10, 11, 12, 17, and 23, TNFα and interferon γ, CD3 and CD4 T cells)” are also currently in development to treat IBD and other inflammatory diseases (Baumgart & Sandborn, 2012).
It is worth noting that dysregulated T cell responses are also associated with other autoimmune diseases, such as arthritis (Haribhai, Chatila, & Williams, 2016). In fact, the National Institute of Allergy and Infectious Diseases states that up to 80 diseases occur due to the immune system attacking the body. This being the case, it is clear that Immunology researchers will play a critical role in providing the scientific community with the knowledge and tools required to pave the way for the next generation of IBD and other autoimmune disease treatments.

Back to Immunotherapy and Hematopoietic Knowledge Center Home