Chemotherapy and radiation are common treatments for many cancers.

They are powerful treatments in terms of destroying rapidly dividing cancer cells, but cannot distinguish between cancerous and non-cancerous cells, such as hematopoietic stem cells (HSCs). This means healthy cells are destroyed in the process of fighting off the cancer cells.
HSCs are the origin of blood and immune cells, which in turn are responsible for fighting infection. Thus, it is common for patients undergoing high doses of radiation and chemotherapy to have compromised immune systems.
HSC transplantation replaces healthy cells, and is a promising avenue for reconstituting proper hematopoietic functioning to effectively rebuild the immune system after chemotherapy.
Hematopoietic stem cell transplantation success is measured by acceptance of donor tissue or cells (graft) as well as time to engraftment (immune reconstitution). One of the major factors in determining success of immune reconstitution is the number of CD34+ cells in the graft prior to transplantation.
Bone marrow and peripheral blood-derived HSCs allow for large numbers of CD34+ cells to be harvested and transplanted, but they are of limited utility if an HLA-matched donor is unavailable. Cord blood-derived hematopoietic stem cells offer a potential solution, as the cells tend to be more naïve, which may lead to fewer occurrences of host-versus-graft-disease (GVHD) in instances of HLA-mismatch.
Despite their potential in combating GVHD, cord blood-derived HSCs also pose a major challenge due to the limited number of cells available from any particular donor. Thus, many research labs and clinical trials are currently focused on developing methods for ex-vivo expansion of cord blood-derived HSCs.
One of the earliest efforts of ex-vivo expansion was focused on culture with exogenous cytokines. However, early clinical trials indicated only a moderate increase in CD34+ cells and no benefit in terms of time to immune reconstitution.
Due to the limited clinical efficacy of culture with exogenous cytokines, efforts have begun to shift toward understanding and controlling the various cell-cell interactions and molecular pathways involved in cell-fate decisions. Two promising methods are co-culture with bone marrow stromal cells and Notch signaling.
The hematopoietic micro-environment, or bone marrow niche, is comprised of many bone marrow stromal cell types that work together to help control HSC self-renewal, proliferation, and differentiation. These include mesenchymal stem cells (MSCs), endothelial cells, CXCL12-abundant reticular (CAR) cells, osteoblast lineage cells and Schwann cells, which influence hematopoietic stem cell self-renewal through secretion of cytokines as well as cell-cell interactions.
The below figure illustrates the influence of cytokine expressing bone marrow stromal cells on HSC self-renewal. MSCs, endothelial cells, and CAR cells all express CXC12 (SD-1), SCF, and angiopoietin. Osteoblast lineage cells express CXCL12 and TPO, whereas Schwann cells express the active form of TGF-β. 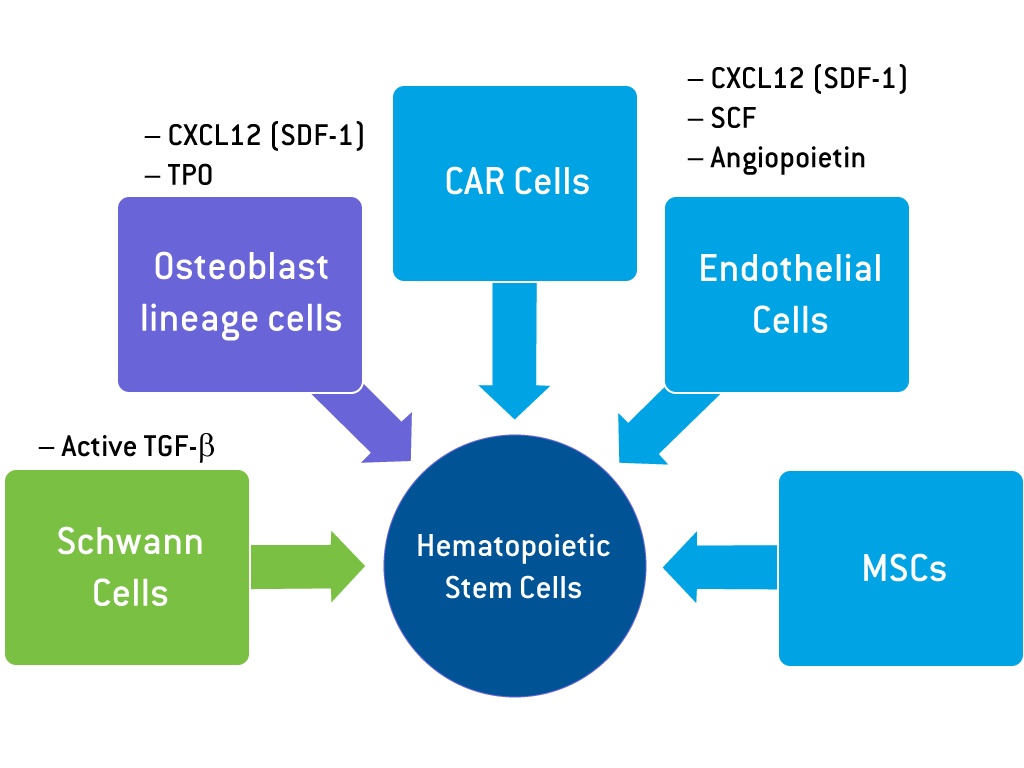 Bone marrow and peripheral blood-derived HSCs allow for large numbers of CD34+ cells to be harvested and transplanted, but they are of limited utility if an HLA-matched donor is unavailable. Cord blood-derived hematopoietic stem cells offer a potential solution, as the cells tend to be more naïve, which may lead to fewer occurrences of host-versus-graft-disease (GVHD) in instances of HLA-mismatch.

There are currently research efforts aimed at exploiting the cell-cell interactions of the bone marrow niche to facilitate ex-vivo expansion of HSCs. Techniques include co-culture of HSCs with bone marrow stromal cells and addition of supporting exogenous cytokines, which has shown a 40-fold increase of CD34+ cells. In addition, there are clinical trials in progress to assess the safety and efficacy of transplantation of ex-vivo co-culture expanded HSCs.

Co-culture with bone marrow stromal cells likely involves many signaling pathways and cell-cell interactions, which may prove difficult to reproducibly control. A somewhat more defined attempt of exploiting HSC self-renewal is focused on the more specific Notch signaling pathway.
The below image is adapted from a publication by Dahlberg et al. and proposes a mechanism whereby Notch2 influences HSC self-renewal and differentiation by first blocking HSC progression toward multipotent progenitors (MPP). Notch 2 can then further block MPPs from differentiation to lymphocytic B cells and to myeloid lineage cells. Conversely, Notch1 promotes differentiation of MPPs to lymphocytic T cells.
Dahlberg et al. were able to initiate HSC self-renewal by activating Notch2 signaling through the use of immobilized Delta1 (Notch2 ligand), fibronectin, and cytokines to both block progression toward MPPs as well as promote HSC self-renewal. This method has been tested in a Phase I clinical trial, with promising results.

These two examples help to illustrate the impressive progress in our collective understanding of the molecular mechanisms involved in the in-vitro expansion of HSCs. However, there is still more to discover before we can fully realize the potential that stem cell based therapies can provide.

Lonza is committed to supporting your efforts in stem cell therapy research, which is why we offer both research grade cord blood-derived CD34+ cells as well as cell therapy tissue acquisition capabilities. Please contact Scientific Support for more information about our research use, cord blood-derived CD34+ cells.
Back to Immunotherapy and Hematopoietic Knowledge Center Home
We use cookies to deliver the best service to you. By continuing to browse the site, you are agreeing to our use of cookies.Ok